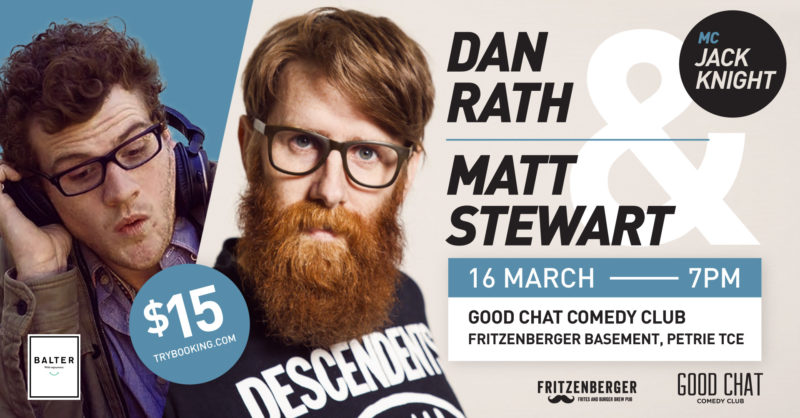 We’ve got a very special Good Chat Comedy Club show on Monday the 16th of March – an amazing combination of quirky, bizarre, and dry, we have Dan Rath and Matt Stewart putting on a joint show. Joined by local legend, Jack Knight – Comedian, the show is a must-see for lovers of left-field comedy.
Matt Stewart has sold out shows across Australia and the UK, and is back in town for a run at the Brisbane Comedy Festival. Known for his quirky deadpan observations and stories skewering life in Australia, masculinity and nostalgia, Matt is an absolute pleasure to see on the stage. His accolades speak for himself, winning RAW Comedy 2014, appearances on ABC TV, ABC Radio, triple j and co-host of hit podcast, ‘Do Go On’.
‘There are few comics in Australia that have the kind of innate sense for laughs that Matt Stewart has. On the dartboard of comedy, he’s a straight-up 180.’ Pedestrian.TV
Dan Rath has enough parking ticket debt to cripple a small European country and he has watched his car get cubed by the government. He has been disrespected by his colleagues and is bruised and battered with nothing to lose. His low status means he has heightened cortisol production and is not equipped to take a gentle ribbing. He has a diverse set of interests including prime numbers.
Join the team Monday the 16th of March at FritzenbergerBNE for a night of beers, burgers, and absolute mayhem as we showcase the best comedic talent from around Australia, featuring two of the absolute best in the country.
—-
Hosted by Good Chat Comedy Club in their home downstairs at FritzenbergerBNE on Caxton St. Tins getting cracked all night long thanks to Balter Brewing Company x
TICKETS HERE!